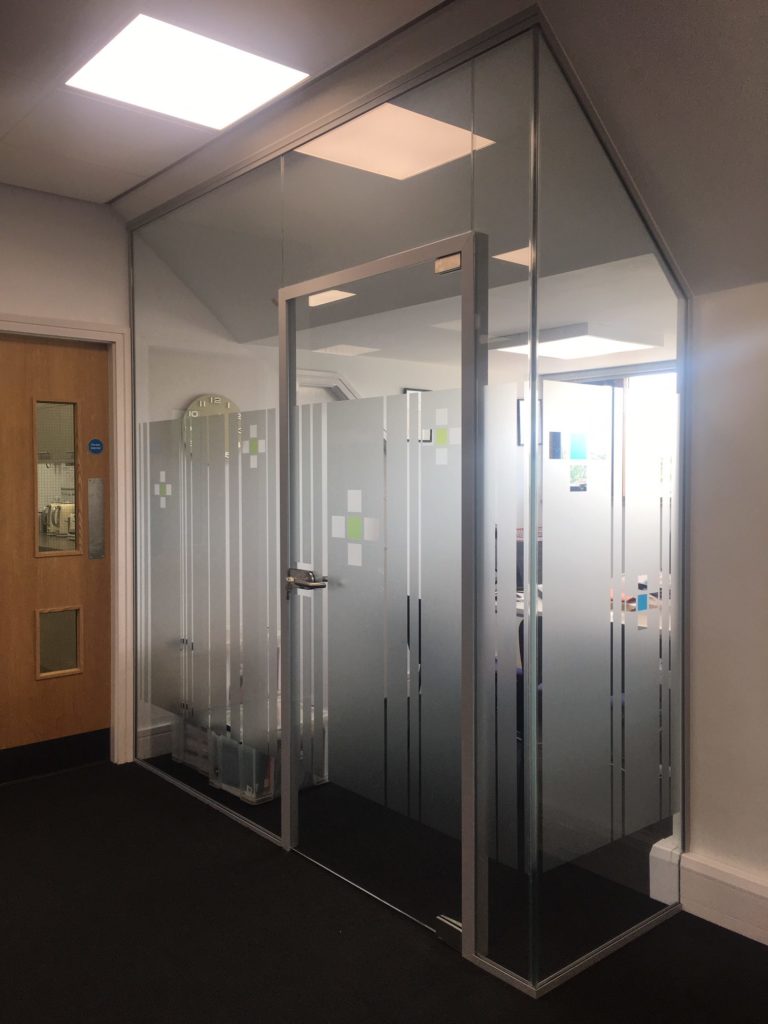 23 May Remodelling of acoustic glass partitioning

This was one of our first ever acoustic glass partitioning projects. We have since completed additional projects for the same customer, helping them remodel their office space, as their business has grown.

The acoustic glass partitions were installed at the office of Towers and Gornall, an accountancy firm based in Garstang, who were increasing in numbers and needed a larger space. They sourced an empty new-build nearby and had the initial layouts designed by an architect. The requirements were to have three glass offices, a glass boardroom, plus a kitchen and store room.

We worked with the company to finalise the design, ensuring the partitioning positioning was suitable for their needs and that it could accommodate the furniture and desking.

Their office is situated on the top ‘loft’ floor and due to this, there is limited natural light. As a result, they decided on glass walls, as they’re perfect for maintaining a light, airy and open feel. However, there was also a need for privacy in the various rooms, so we recommended acoustic glass, which minimises sound transference. This glass partitions also incorporated framed lockable doors, again for soundproofing purposes. We also designed the graphics sized to reach halfway up the glass, which also helped with the privacy aspect. Additionally, the graphics featured a subtle use of colours generated from their logo to complement their branding.

Once the carpet and other building works had been completed, we installed the glass partition track -work and measured for the glass, which was then installed upon delivery directly to site. The fitters carefully carried the heavy glass up three flights of stairs.

The resulting office, with the acoustic glass, was a great success as the sound rating was around 48db once the door was closed. This was very useful as the open office area is directly outside of the private offices and meeting room.

12 months later, the client commissioned us to add a further glass office, this time attaching directly onto the glass wall of the boardroom. The requirement was again to be in acoustic glass with a framed door and a lever locking handle, which we installed within 2 weeks of the quote approval.

The solution they decided upon, was to utilise the space taken up by one of the existing meeting rooms. The office partitioning was removed but couldn’t be reused unfortunately as it was slightly too small for the new position it would be occupying, we were able to reuse the ironmongery though, which provided considerable savings for the client.

We also created a new, non-acoustic, smaller office nearer to the reception, this was for greeting clients instead of them walking immediately into the open plan area of the office. This new room featured a frameless door to match an existing door directly opposite. The finishing touch was the application of graphics to match the existing manifestations in the office, then the reconfiguration was complete.

The re-modelling of the space has been a great success and illustrates just how easy it is to reconfigure space, when using glass partitions. It’s also possible to achieve changes with a quick turnaround too and a lot less disruption than when removing a solid wall partition.

Remodelling of glass partitions can work particularly well if the carpet has been laid throughout, before the track work is installed, this way there are no cuts in the flooring that would require attention due to looking unsightly when the track is removed.

If you would like to discuss a potential office remodelling project, please contact us to arrange a meeting 01254 812112 or email info@altitudeglass.co.uk